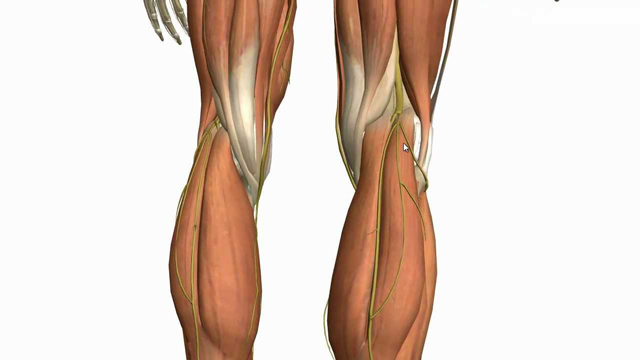 There are several ways of classifying the muscles of the foot: (1) By location or innervation (ventral an dorsal divisions of the plexus layer); (2) by development on the basis of their points of insertion (a posterior group in two layers and an anterior group); and (3) by function (i.e. extensors, flexors, adductors, and abductors).

The muscles of the thigh can be classified into three groups according to their location: anterior and posterior muscles and the adductors (on the medial side). All the adductors except gracilis insert on the femur and act on the hip joint, and so functionally qualify as hip muscles. The majority of the thigh muscles, the “true” thigh muscles, insert on the leg (either the tibia or the fibula) and act primarily on the knee joint. Generally, the extensors lie on anterior of the thigh and flexors lie on the posterior. Even though the sartorius flexes the knee, it is ontogenetically considered an extensor since its displacement is secondary.

Of the anterior thigh muscles the largest are the four muscles of the quadriceps femoris: the central rectus femoris, which is surrounded by the three vasti, the vastus intermedius, medialis, and lateralis. Rectus femoris is attached to the pelvis with two tendons, while the vasti are inserted to the femur. All four muscles unite in a common tendon inserted into the patella from where the patellar ligament extends it down to the tibial tuberosity. Fibers from the medial and lateral vasti form two retinacula that stretch past the patella on either sides down to the condyles of the tibia.

The quadriceps is the knee extensor, but the rectus femoris additionally flexes the hip joint, and articular muscle of the knee protects the articular capsule of the knee joint from being nipped during extension. The sartorius runs superficially and obliquely down on the anterior side of the thigh, from the anterior superior iliac spine to the pes anserinus on the medial side of the knee, from where it is further extended into the crural fascia. The sartorius acts as a flexor on both the hip and knee, but, due to its oblique course, also contributes to medial rotation of the leg as one of the pes anserinus muscles (with the knee flexed), and to lateral rotation of the hip joint.

There are four posterior thigh muscles. The biceps femoris has two heads: The long head has its origin on the ischial tuberosity together with the semitendinosus and acts on two joints. The short head originates from the middle third of the linea aspera on the shaft of the femur and the lateral intermuscular septum of thigh, and acts on only one joint. These two heads unite to form the biceps which inserts on the head of the fibula. The biceps flexes the knee joint and rotates the flexed leg laterally – it is the only lateral rotator of the knee and thus has to oppose all medial rotator. Additionally, the long head extends the hip joint. The semitendiosus and the semimembranosus share their origin with the long head of the biceps, and both attaches on the medial side of the proximal head of the tibia together with the gracilis and sartorius to form the pes anserinus. The semitendinosus acts on two joints; extension of the hip, flexion of the knee, and medial rotation of the leg. Distally, the semimembranosus’ tendon is divided into three parts referred to as the pes anserinus profondus. Functionally, the semimembranosus is similar to the semitendinosus, and thus produces extension at the hip joint and flexion and medial rotation at the knee.[20] Posteriorly below the knee joint, the popliteus stretches obliquely from the lateral femoral epicondyle down to the posterior surface of the tibia. The subpopliteal bursa is located deep to the muscle.

Popliteus flexes the knee joint and medially rotates the leg.

With the popliteus as the single exception, all muscles in the leg are attached to the foot and, based on location, can be classified into an anterior and a posterior group separated from each other by the tibia, the fibula, and the interosseous membrane. In turn, these two groups can be subdivided into subgroups or layers – the anterior group consists of the extensors and the peroneals, and the posterior group of a superficial and a deep layer. Functionally, the muscles of the leg are either extensors, responsible for the dorsiflexion of the foot, or flexors, responsible for the plantar flexion. These muscles can also classified by innervation, muscles supplied by the anterior subdivision of the plexus and those supplied by the posterior subdivision.

Three of the anterior muscles are extensors. From its origin on the lateral surface of the tibia and the interosseus mebrane, the three-sided belly of the tibialis anterior extends down below the superior and inferior extensor retinacula to its insertion on the plantar side of the medial cuneiform bone and the first metatarsal bone. In the non-weight-bearing leg, the anterior tibialis dorsal flexes the foot and lifts the medial edge of the foot. In the weight-bearing leg, it pulls the leg towards the foot. The extensor digitorum longus has a wide origin stretching from the lateral condyle of the tibia down along the anterior side of the fibula, and the interosseus membrane. At the ankle, the tendon divides into four that stretch across the foot to the dorsal aponeuroses of the last phalanges of the four lateral toes. In the non-weight-bearing leg, the muscle extends the digits and dorsiflexes the foot, and in the weight-bearing leg acts similar to the tibialis anterior. The extensor hallucis longus has its origin on the fibula and the interosseus membrane between the two other extensors and is, similarly to the extensor digitorum, is inserted on the last phalanx of big toe (“hallux”). The muscle dorsiflexes the hallux, and acts similar to the tibialis anterior in the weight-bearing leg. Two muscles on the lateral side of the leg form the peroneal group. The peroneus longus and brevis both have their origins on the fibula and they both pass behind the lateral malleolus where their tendons pass under the peroneal retinacula. Under the foot, the longus stretches from the lateral to the medial side in a groove, thus bracing the transverse arch of the foot. The brevis is attached on the lateral side to the tuberosity of the fifth metatarsal. Together the two peroneals form the strongest pronators of the foot. The peroneus muscles are highly variable and several variants can occasionally be present.

Of the posterior muscles three are in the superficial layer. The major plantar flexors, commonly referred to as the triceps surae, are the soleus, which arises on the proximal side of both leg bones, and the gastrocnemius, the two heads of which arises on the distal end of the femur. These muscles unite in a large terminal tendon, the Achilles tendon, which is attached to the posterior tubercle of the calcaneus. The
plantaris closely follows the lateral head of the gastrocnemius. Its tendon runs between those of the soleus and gastrocnemius and is embedded in the medial end of the calcaneus tendon.

In the deep layer, the tibialis posterior has its origin on the interosseus membrane and the neighbouring bone areas and runs down behind the medial malleolus. Under the foot it splits into a thick medial part attached to the navicular bone and a slightly weaker lateral part inserted to the three cuneiform bones. The muscle produces simultaneous plantar flexion and supination in the non-weight-bearing leg, and approximates the heel to the calf of the leg. The flexor hallucis longus arises distally on the fibula and on the interosseus membrane from where its relatively thick muscle belly extends far distally. Its tendon extends beneath the flexor retinaculum to the sole of the foot and finally attaches on the base of the last phalanx of the hallux. It plantarflexes the hallux and assists in supination. The flexor digitorum longus, finally, has its origin on the upper part of the tibia. Its tendon runs to the sole of the foot where it forks into four terminal tendon attached to the last phalanges of the four lateral toes. It crosses the tendon of the tibialis posterior distally on the tibia, and the tendon of the flexor hallucis longus in the sole. Distally to its division, the quadratus plantae radiates into it and near the middle phalanges its tendons penetrate the tendons of the flexor digitorum brevis. In the non-weight-bearing leg, it plantar flexes the toes and foot and supinates. In the weight-bearing leg it supports the plantar arch.[21] (For the popliteus, see above.)

The intrinsic muscles of the foot, muscles whose bellies are located in the foot proper, are either dorsal (top) or plantar (sole). On the dorsal side, two long extrinsic extensor muscles are superficial to the intrinsic muscles, and their tendons form the dorsal aponeurosis of the toes. The short intrinsic extensors and the plantar and dorsal interossei radiates into these aponeuroses. The extensor digitorum brevis and extensor hallucis brevis have a common origin on the anterior side of the calcaneus, from where their tendons extend into the dorsal aponeuroses of digits 1-4. They act to dorsiflex these digits.
The plantar muscles can be subdivided into three groups associated with three regions: those of the big digit, the little digit, and the region between these two. All these muscles are covered by the thick and dense plantar aponeurosis, which, together with two tough septa, form the spaces of the three groups. These muscles and their fatty tissue function as cushions that transmit the weight of the body downward. As a whole, the foot is a functional entity.

The four lumbricales have their origin on the tendons of the flexor digitorum longus, from where they extend to the medial side of the bases of the first phalanx of digits two-five. Except for reinforcing the plantar arch, they contribute to plantar flexion and move the four digits toward the big toe. They are, in contrast to the lumbricales of the hand, rather variable, sometimes absent and sometimes more than four are present.

The quadratus plantae arises with two slips from margins of the plantar surface of the calcaneus and is inserted into the tendon(s) of the flexor digitorum longus, and is known as the “plantar head” of this latter muscle. The three plantar interossei arise with their single heads on the medial side of the third-fifth metatarsals and are inserted on the bases of the first phalanges of these digits. The two heads of the four dorsal interossei arise on two adjacent metatarsals and merge in the intermediary spaces. Their distal attachment is on the bases of the proximal phalanges of the second-fourth digits. The interossei are organized with the second digit as a longitudinal axis; the plantars act as adductors and pull digits 3-5 towards the second digit; while the dorsals act as abductors. Additionally, the interossei act as plantar flexors at the metatarsophalangeal joints. Lastly, the flexor digitorum brevis arises from underneath the calcaneus to insert its tendons on the middle phalanges of digit 2-4. Because the tendons of the flexor digitorum longus run between these tendons, the brevis is sometimes called perforatus. The tendons of these two muscles are surrounded by a tendinous sheath. The brevis acts to plantar flex the middle phalanges. 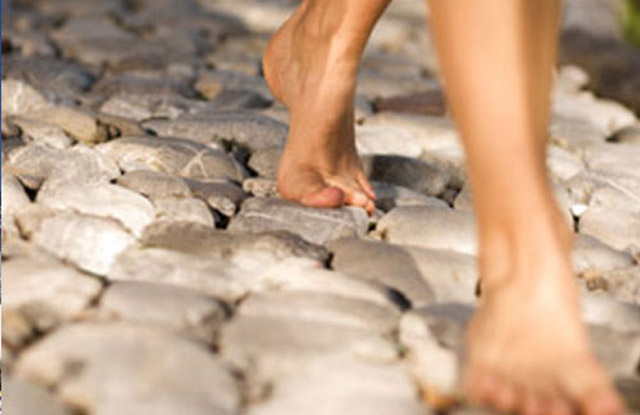 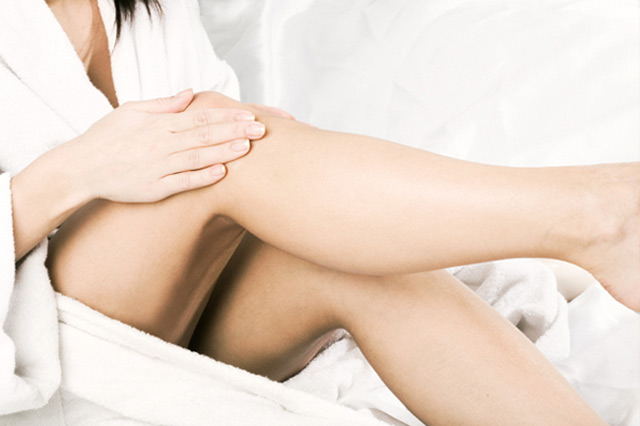 Next article - How to get rid of hair on your legs »